If you are here for the Highlander Giveaway Hop, click here. Thanks for visiting!

I participate in a group blog with three other paranormal romance authors--Supernatural Superlatives. I have a post up about my monster plant--night-blooming cereus. Stop by for a visit and check out the photos of the awesome plant and its bloom.

If you are here for the Highlander Giveaway Hop, click here, but I hope you will check out the Sneak Peek post below and visit the other sneak peek authors too. Thanks for visiting!

Now, for today's Sneak Peek, another Caitrina excerpt from Just Once in a Verra Blue Moon...


﻿
Caitrina stood amongst the rose-colored foxgloves, alone in the shadows near the garden’s rear gate. She smiled when Finn evaded Jillian’s clumsy attempt to attract his attention. As he disappeared into the house, Caitrina turned away to gaze at the silvery haze surrounding the full moon. The time neared, and she’d work to do.

She would set the match into action before the High Queen of the Fae learned the game had begun. Caitrina could almost taste victory. This round and one more—she’d earn her freedom and be returned to the royal realm.

She inhaled a deep breath and uncurled her fists.

From her peripheral vision, she glimpsed Douglas MacKinnon watching her. Didn’t he understand he no longer aroused her curiosity?

She pressed her palm against her chest. She must have ingested a stimulant with an unusual property capable of causing a faerie heart to beat too fast. 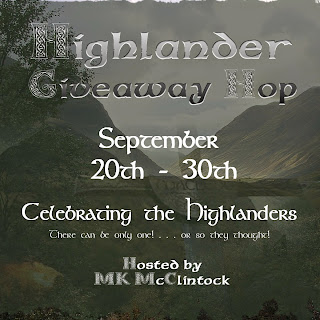 If you are here for the Fall into Romance blog hop, click here , but I hope you'll check out the Highlander Giveaway Hop too.

As many of you know, I love Scotland and Scottish things. I enjoy reading and writing Scottish inspired tales. And if there is a paranormal or fantasy element included, all the better. So, for the Highlander Giveaway Hop, I'm featuring the first two books in the Highland Gardens series.

﻿﻿﻿The Scottish Highlands—a place where faeries and brownies and other fae creatures dance through time. On occasion, so do mere mortals.

Just Beyond the Garden Gate - Book 1

Just Once in a Verra Blue Moon - Book 2

What happens when a twenty-first century business executive is expected to fulfill a prophecy given at the birth of a sixteenth-century seer? Of course, he must raise his sword in her defense.

Believing women only want him for his wealth, Finn MacIntyre doesn't trust any woman to love him. When, during Scottish Highland games, faerie magic sends him back in time to avenge the brutal abduction of his time-traveling cousin, he learns he's the subject of a fae prophecy.

Elspeth MacLachlan, the beloved clan seer, is betrothed to a man she dislikes and dreams of the man prophesized at her birth, only to find him in the most unexpected place—facedown in the mud.

With the help of fae allies, they must overcome the treachery set to destroy them to claim a love that transcends time.

Highland Gardens Giveaway
(US addresses only)


I so enjoy this time of year. Cooler temperatures make outdoor activities more fun. Perhaps a trip to the mountains and a hike to a waterfall. A waterfall is one of the settings in my paranormal novel Sea Panther. Robert and Laurie travel back in time to Jamaica 1715 to try to reverse the effects of a Voodoo curse. Dunn's River Falls was the inspiration for a playfully sexy scene for the couple.


Where the hell is she?

Robert shifted the bulk of his weight from one leg to the other, yet again, and glanced at the mid-day sky. Bright sun. Blue sky. Weather would remain clear. He returned his stare to the outside of the ballroom’s double doors as if force of will alone would make Kimberly appear.

He’d been waiting for her on the terrace of the governor’s home for what seemed like an eternity. In reality, no more than a half-hour passed. After a quick post-ceremony toast to their nuptials, she’d gone to her room to change into a simpler gown.

Preferably, a garment easy to remove.

Soon she’d be all his. He chuckled. The governor had snickered like a fool and poked him in the ribs when he’d informed Robert of the romantic glen and waterfall in the hills above the great house. The secluded pools were ideal for swimming in the raw, or so Archibald said. A perfect spot for a tryst.

You'll need the book to read more about the tryst. Here is your chance to receive a gift e-book copy of Sea Panther (Kindle or Nook). Just leave a comment below telling me about your favorite fall outdoor activity. I'll draw one name out of the captain's hat after the hop has ended. Good luck!

BTW: Sea Panther is competing for the September cover of the month at Lolly Tova's blog. If you like the cover, I'd appreciate a vote: http://www.lollytova.com/septembers-cover-love-poll/ Thanks!


Thanks for participating in the Fall into Romance blog hop. Be sure to check out: Hops with Heart for future blog hops. Now, hop along to some of the other participating blogs...

The other day, a reader asked if there were any characters from previous books demanding their story. Well, yeah! Caitrina, the halfling faerie princess from the Highland Gardens series. She will get her story, but I have a few others in the works first. So I thought for Sneak Peek Sunday, I'd share a Caitrina excerpt.

From Just Once in a Verra Blue Moon...

﻿
“Easy, lass.” Douglas grabbed her by the upper arms. “I wouldn’t want you to fall off this ridge.”

“Take your hands off of me, you Neanderthal.”

He pulled her against his thick chest. Fates, he felt good. “What were you doing with the queen?” he demanded.

She gasped. How could he possibly know of Oonagh?

Caitrina leaned her head back and stared into his amber eyes, searching for truth. “Who are you?”

“Someone to watch over you.” He lowered his head and kissed her hard on the lips, curling her toes.

Today for Sneak Peek Sunday, unbeknownst to the captain, the first mate invites Kimberly to come aboard for the night and she has a nightmare...


The animal growled. A blood curdling sound that raised the hairs on her arms. Canines bared, he leapt toward her. Lunged for her throat. She toppled backward; fell over the edge, screamed.

She woke with her body covered in sweat.

Another growl echoed in the night. This one sounded like a tomcat yowling, though louder. More frightening.

Kimberly bolted up in the bed. With a shaky hand, she reached for the switch and turned on the reading light over the bunk.

The captain stood in the doorway. Gorgeous cinnamon eyes bore into her. His intimidating breadth and height pressed against the edges of the small portal made him appear larger. Dangerous.