Patrick closed his eyes and growled deep in his throat as desire pooled in his groin. Their kiss, potent and deep, an intoxicating aphrodisiac, became more and more heated. At first, he’d been shocked by the arc of power, but he couldn’t stop himself from claiming what he sensed belonged to him. What started as an unconscious display of dominance became a much more meaningful symbol of possession.

Posted by Dawn Marie Hamilron at 7:45 AM No comments: 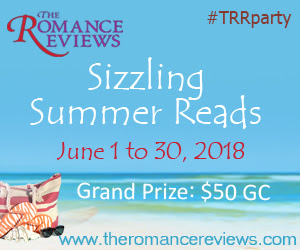 I'm excited to be part of this fabulous giveaway party hosted by The Romance Reviews. Over 100 participating authors and prizes galore.

My novel Just Wait For Me from the Highland Gardens series will be featured in the hangman game on June 9th, and I'll be gifting a Kindle edition of the book to the winner of the game. Sounds like fun. Right?

To participate in the games and giveaways you'll need to register and be logged in at TRR so your game points can be tracked. Registration is free and easy.

Hope to see you there!

Click on the link below to join the party.

Posted by Dawn Marie Hamilron at 7:02 AM No comments: