A sneak peek (unedited excerpt) from 'Just His Fae Kiss', a work in progress, the next tale in the Highland Gardens series...
∞∞∞
Garden clogs scuffing over the woodland trail, Caitrina took the short walk at a vigorous pace, glad she’d changed into a t-shirt and shorts. Perhaps she’d get her hands dirty puttering in the flower beds. That should make her feel better.


Only a few minutes passed before she entered through the front gate of the display garden and found the serenity she sought in the heady scents of an abundance of summer blooming plants. Bright pink Stargazer oriental lilies provided the most potent of the fragrances.


She dropped onto the cement garden bench with an audible sigh. The joyous reunion of Tevin with his parents and the exuberant well-wishers had brought on a mind-numbing melancholy along with the guilt. She’d missed her friends during the six year self-imposed banishment.


All their friends from Anderson Creek were at the house to celebrate Tevin’s return. Except for one. Why hadn’t Douglas come?


He claimed to be in love with Caitrina. Okay, that was six years ago. Had he lost interest during her absence? Had he found someone new? Married?


Finn claimed to have informed him of her return. Said Douglas planned to drive over in his truck. But several hours had passed and the man was a no show.


Damn the man. She’d missed him terribly while she’d been gone.


Caitrina’s sensitive ears perked at a nearby rustle of leaves. Someone approached from the rear of the garden. Someone who smelled very much like a faerie. A familiar faerie. Shite! Caitrina jumped to her feet. Darted a panicked gaze from side to side. Thought to fade into the vanishing. Shite, shite, shite! She wasn’t calm enough to disappear.


She needed to slow her heart rate. Concentrate. But how could she do that when she’d been thinking of Douglas. And now this…


Stop it. She shouldn’t be so fretful. She was surely mistaken. He wouldn’t come to her on foot. Her betrothed wouldn’t lower himself to such a human mode of mobility. He would just appear in front of her from the nether and issue unreasonable demands.


To prove her wrong, Dugaid strode from the rhododendron trail in all his dark, masculine beauty, the black silk mask covering a portion of his face adding to his raw sex appeal. Garbed in black leather, and with all manner of weaponry draping his powerful six-foot seven frame, no one could mistake him for any other than the Prince of the Black River. The Son of the King and Queen of the Fae. The Dark Prince. Caitrina’s betrothed.
∞∞∞


Hope you enjoyed this wee sneak peek into 'Just His Fae Kiss', a Highland Gardens Novel.

~Dawn Marie
Posted by Dawn Marie Hamilron at 3:00 AM 1 comment: 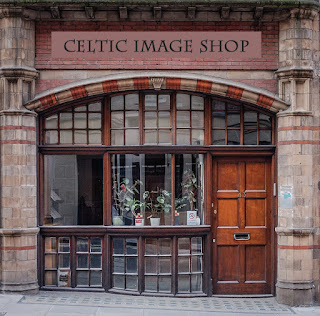 A sneak peek (unedited excerpt) from 'Just His Fae Kiss', a work in progress, the next tale in the Highland Gardens series...
∞∞∞
“She’s been gone going on six years.”


As if he didn’t ken that fact. Douglas paced across the display floor of the Celtic Image Shop, his red and green MacKinnon kilt swaying with his stride, and flicked a glare at his business partner and best friend. That is, if someone like him could have a best friend. Five inches shorter than Douglas at six-foot-two and sporting one of the store’s cream-colored logo t-shirts, Finn MacIntyre stood behind the checkout counter with a slight smirk curving his lips, blue eyes crinkled at the edges. Douglas ignored the urge to punch that damn golden-boy face.


Finn sobered; ran a hand through his honey-colored hair. “Where do you think she is?”


“Somewhere in Scotland, I presume.” Ancient Scotland. Though he’d felt something change in the fabric of time. Was she on the move?


Finn’s question stopped his pacing. “You dinnae understand. Caitrina is—”


“I know exactly who and what she is. Remember, she nefariously meddled in my life, that of my cousin’s, and in countless others’ amongst our friends.”


“If you are referring to the matchmaking, it served you well.”


“Perhaps, but Caitrina shouldn’t have sent us to the past without our permission. She was in the wrong. Are you sure you want to stay involved with her?”


Douglas darkened his glower. Thunder rumbled over the mountains behind the shop.


“You always attract an excess of female attention at the Highland games,” his buddy continued, ignoring the loud warning. “Since you’re fond of redheads, why not date that singer from the Scottish tribal band you like? What’s her name?”


Hope you enjoyed this wee sneak peek into 'Just His Fae Kiss', a Highland Gardens Novel.

~Dawn Marie
Posted by Dawn Marie Hamilron at 3:00 AM No comments:

A sneak peek into 'Just Within a Highland Mist', a novella, the fifth tale in the Highland Gardens series...
∞∞∞
“Are you sure there aren’t any dragons? He’s orange,” Tevin persisted.
Munn jerked his gaze to the bairn, annoyed by the interruption to his deliberation. He hated the need to think, but he must figure out what to do about the lad. “Who’s orange?”
“The dragon. It is my destiny to slay the orange dragon.”
“I told you. There are nae dragons here.”
“But Allison and Malcolm said—”
Munn held up a hand. “You best forget about dragons and come with me to Castle Lachlan. The chief will ken what to do with you. And I dinnae want to hear any more about the winged beasts.”
Tevin rolled his eyes to the side and curved tight lips into a disgruntled frown, but when Munn started off, the lad fell into step behind him. “What about the little faeries that brought me here? They have wings.”
Munn stopped short, and the bairn slammed into his back. He spun around and righted the lad. “What faeries?”
“I thought they were dragonflies at first, but they’re really cool. They’re girls with wings. They brought me here. There was one with green wings and another with purple and—”
“Whist! Needs be I think.”
Pixies? Why were pixies sifting time? What mischief did the ebony-haired Marcail and her pesky clan ponder?”
∞∞∞ 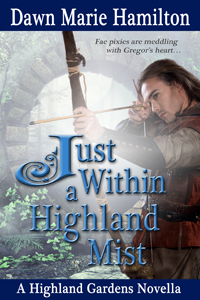 Just Within a Highland Mist

∞∞∞
Hope you enjoyed this wee sneak peek into 'Just Within a Highland Mist', a Highland Gardens Novella.

~Dawn Marie
Posted by Dawn Marie Hamilron at 8:11 AM No comments: