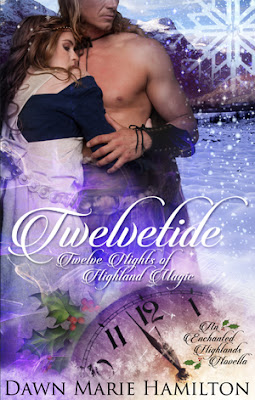 He has twelve nights to gain her love. She has twelve nights to save his soul.
Fulfilling a childhood promise, Ashley Dumont returns to an ancient Druid garden in the Black Hills of Scotland on the eve of the winter solstice—a time when magic hums and the veil between realms thins and tears, allowing all manner of supernatural creatures through. Will the ghost who claimed to be her destiny still be there?

Caelan Innes awaits her arrival. Unjustly murdered in the sixteenth century, a second chance at life depends on this woman. The Druids grant them the twelve nights of Yule to find love and save Cael’s soul.