Excerpt Wednesday: Just Wait For Me by Dawn Marie Hamilton 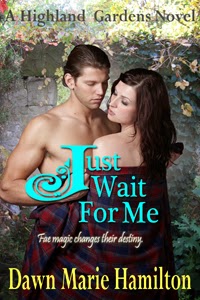 For this week's Excerpt Wednesday, I hope you enjoy the first several paragraph's from the prologue of my latest release, Just Wait For Me, the third novel in the Highland Gardens series...


9 September, 1513
Near the village of Branxton in northern England


The king is dead.


Anguish tore from her halfling soul with a fae scream that reverberated over the field of devastation like rolling thunder. Silence ensued. Men frozen in fear.


Caitrina dropped to her knees beside the redheaded warrior and ran gentle fingers along the bloodied curve of his handsome face. Damn Oonagh! Damn the Fae Queen! She’d refused to allow Caitrina to intervene in the politics of the mortals and prevent this tragedy.


Now, the king lay dead, fatally wounded by an arrow and a bill. Be damned the English and their nasty weapon—the bill, a staff mounted with a hooked chopping blade and pointed projections. The Scots hadn’t stood a chance against the onslaught on the slippery, hilly terrain with their cumbersome pikes.


Heartbroken, she cradled the man to her breast. Such greatness lost. Tears spilled unchecked onto his precious face. Too late. Even the magic tears of a Sithichean princess couldn’t revive the king.

Just Wait For Me exclusively at Amazon.

~Dawn Marie
Posted by Dawn Marie Hamilron at 7:00 AM