A Red Mug and a Christmas Kiss by Dawn Marie Hamilton

My author friend, Terry Spear, challenged me to write a short, very short story inspired by a holiday picture of my choosing for her blog. I’m also sharing the wee tale here. If you’ve read Just Wait For Me from my Highland Gardens series, you met a young lad named Tevin in the epilogue. He appears again in the upcoming novella, Just Within a Highland Mist, coming Winter 2017.

In A Red Mug and a Christmas Kiss, this very short holiday tale, Tevin is all grown up and working as a Santa’s helper for the holidays at Foxgloves, the garden center owned by his mother Jillian, and her two partners… 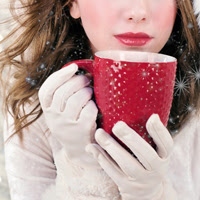 Melinda had always wanted to be a Santa’s helper. At twenty-five, it seemed like a silly childhood dream.

Snowflakes danced on the breeze, landing on her cheeks and the tip of her nose. She shivered and sipped from the red ceramic mug she’d just purchased at the garden center’s gift shop along with hot cider. The owners of Foxgloves were Scottish and all the greenery was decorated with tartan ribbon and bows.

Wandering past rows of Christmas trees, the sharp scent of fir, along with apple and cinnamon from the cider, reminded her of Christmases long past. She missed her family. Felt alone in this new mountain town.

In the center of the display garden, a Christmas village had been erected. Young men, dressed in kilts and tunics and wearing elf hats, used hand puppets to entertain children waiting their turn to sit on Santa’s lap and give the white-bearded man their Christmas wish lists.

Melinda couldn’t help but ogle the guys’ muscular legs exposed to the chilly air. She’d be covered in goose bumps if she—

“Lass, would you be so kind as to help me with a medieval skit?”

She lifted her gaze from a firm pair of masculine legs, up a tight body, to very kissable lips that broadened into a grin. Blue eyes glinted with humor. Heat burned her cheeks. And it wasn’t from the steam rising from the red mug.

He handed her a puppet depicting a faerie princess and another a fair maiden and introduced her to the crowd as Santa’s Helper Melinda. She then joined him in an improvised skit where the faerie princess bestowed magic powers upon a warrior who slayed a dragon and won the hand of the fair maiden.

“That was fun,” she said as they walked away from the Christmas village to a secluded picnic table.

“It was.” He pulled a flask out of his sporran. “I’m finished for the night. Would you care for some whisky?”

He poured a small measure of the amber liquid into the red mug and handed it over. She sipped the drink and smiled. How could she let him know of her interest in him without feeling a fool?

Tevin took the mug from her hand and drank from the spot her lips had touched. “I like the taste of your lips. May I?”

The intent glowing in his eyes near to burned her. Her stomach shimmied. Still, she nodded.

His arm encircled her waist; drew her close. The touch of his lips against hers was soft. Gentle. Stole her breath. Became demanding. She dropped the empty red mug into the snow and wrapped her arms around his neck, surrendering to the magic of his Christmas kiss.


Wishing you and your family a very Merry Christmas!

~Dawn Marie
Posted by Dawn Marie Hamilron at 10:49 AM