Coming Soon: Just Wait For Me by Dawn Marie Hamilton 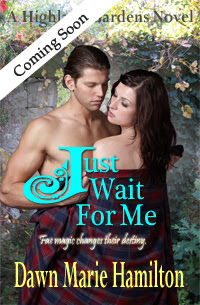 Just Wait For Me
A Highland Gardens Novel
Book #3

In the chaotic aftermath of the battle of Flodden, an injured Highland warrior makes a vow to a twenty-first century lass cast back in time by a meddling, matchmaking faerie. Stephen MacEwen promises to find a way to send her forward to her own time. But is that an oath he'll want to keep after finding love in Jillian O'Donnell's arms? And after saving Stephen's life, will Jillian want to go?

No matter what the lover's decide, Stephen's wife—a woman who acquired the title through deceit—and an old enemy attempt to destroy the couple's chance for happiness. Only with the help of fae allies can Stephen and Jillian overcome and earn their reward—everlasting love.

“Your recovery has been truly miraculous,” she said. “I’m becoming a believer in your fae healing magic.”

His quick grin was electric, and it sent a shiver of awareness through her body, culminating in the clenching of her sex. She stepped close to Stephen, placed a palm on his bare chest. The children were off to who knew where, and she was determined to take advantage of their absence. Jillian rolled onto the balls of her feet and planted a kiss on Stephen’s lips.

He stiffened, but then got with the program. The sword dropped with a clatter to the floor and his arms came around her in a crushing embrace. He repositioned his head and sought her tongue. The heady sensation curled her toes. She clutched his firm ass. God, he tasted good from the medicinal herbs the women made him eat. When the kiss ended they pressed their foreheads together and just breathed.

“Ach, lass, you make me want things I must not have.”

“What do you mean?” She leaned away. “I know we haven’t known each other long, but sometimes it only takes a moment to feel an undeniable attraction that might blossom into more. I feel that with you.”

He ran a hand through his overlong blond hair. “You are so sweet…”

He opened his mouth, though before he provided an explanation a crashing noise came from the entrance. Stephen dove for the sword, and she swirled to face the opening.

Other Books in the Highland Gardens series... 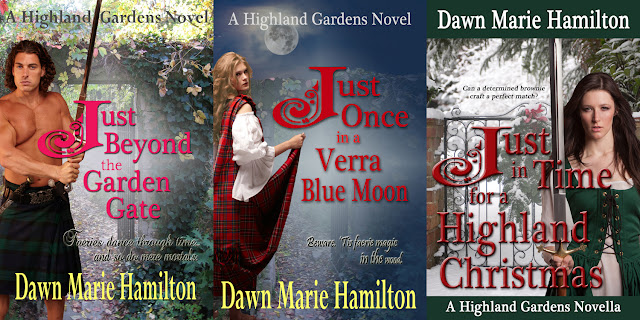 Available at Amazon and Barnes & Noble.


~Dawn Marie
Posted by Dawn Marie Hamilron at 9:36 AM No comments: