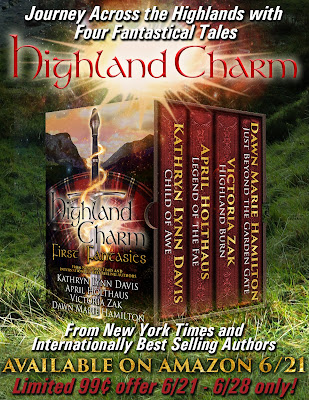 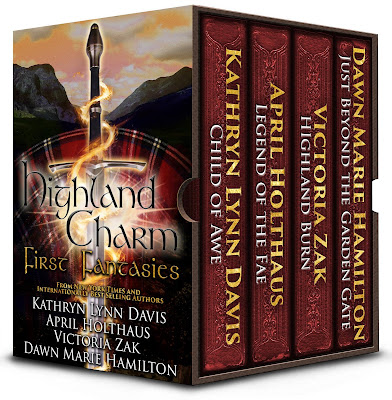 Available only for the Summer.

From the moment of her birth, Muriella Calder is heiress to a great fortune many Highland clans desire to make their own. Touched by The Sight, she struggles to understand herself, while fighting those who threaten her world: the violent clans who relish war; her cunning guardian, Archibald Campbell, the powerful Earl of Argyll—callously ambitious, and bound by loyalty to the Crown; John Campbell, the Earl’s second son—a strong, experienced warrior on the battlefield—who cannot begin to understand the mysterious woman he is forced to wed; and Elizabeth Campbell Maclean, a gentle woman whose heart is forfeit in a treaty with a man her father hates.

Completely captivating, Child of Awe carries the reader from the wild beauty of mist-shrouded glens to the horrors of war, from the hatred of ancient feuds to the wonder of new love: enchanting us, heart and soul, with the seamless skill of a genuine storyteller.


LEGEND OF THE FAE by APRIL HOLTHAUS

After returning home from battle against a neighboring clan, Laird Galen Graham stumbles upon an injured woman in desperate need of care and protection. Wanting to return her to her family becomes a difficult task when he discovers the lass cannot speak. While trying to solve the mystery behind who she is, Galen finds himself falling in love with a lass he knows nothing about.

Ella of Andor, knows nothing but wickedness and blood thirst for power as she follows in the footsteps of her predecessor, Alaris; a dark Fae queen. But while heading on a quest to ensure her people’s victory against their enemy, she is led to the heart of the Highlands where she soon discovers the truth about her past that would change her life forever.

The past never stays in the past, it rears its ugly head eventually. James the Black Douglas knows this all too well. With a past that has left him vengeful and his dragon blood thirsty, his reputation as a ruthless warrior haunts his enemies in their sleep. As his allegiance stands with Robert Bruce, the King of Scotland, he must now repay a debt to the king and agrees to marry his daughter, Abigale Bruce. The problem is he doesn't want a wife. When flames start to burn out of control between him and the auburn-haired lass, he must decide to either kindle the flames of passion or shelter her from the truth and set her free.

It's What Shines in the Dark That Brings Forth Your True Light...

Determined to keep his daughter safe and out of the hands of the English, Robert hides Abigale behind the safe walls of a nunnery. After eight long years of living her life in seclusion, Abigale is finally set free. But her new found freedom comes to an abrupt halt when she learns of her betrothal to the infamous Bogeyman - James the Black Douglas. She soon finds herself falling in love with the uncontainable and haunted man. Is her love enough to soften his hardened heart?


JUST BEYOND THE GARDEN GATE by DAWN MARIE HAMILTON

I'm very excited about this collection of first fantasies romances. I hope you will be too!

Posted by Dawn Marie Hamilron at 7:26 AM No comments: