A Viking Encampment at a Celtic Festival and Highland Gathering? Hrafnvik Herlith

This past weekend was the 36th Southern Maryland Celtic Festival and Highland Gathering at Jefferson Patterson Park & Museum on the Patuxent River.
.


Since my husband has been working with the Longship Company to get the Viking longship, Sae Hrafn (Sea Raven), ready for the season, we volunteered to help out at the Hrafnvik Herlith encampment.


Hrafnvik Herlith is a living history group specializing in 800-1066 Norse culture and is a subgroup of the Longship Company who operates two reproduction Viking ships in Southern Maryland--the 20ft Grylfalcon and 40ft Sae Hrafn.


Why a Viking encampment at a Celtic festival? The Viking age in Ireland lasted for nearly two centuries. It began with raids on Irish monasteries and ended with the Norse melding into Irish culture. Viking settlers also colonised parts of Scotland. 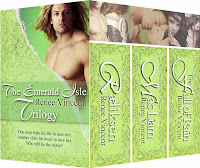 Looking for a romantic read for the period? Consider Renee Vincent's The Emerald Isle Trilogy -- Raeliksen, Mac Liam, and The Fall of Rain.

~Dawn Marie
Posted by Dawn Marie Hamilron at 12:00 AM