Contradictory information regarding the diminutive creatures known to the Lowland Scots as brownie and to those who speak the Scottish Gaelic as brùnaidh abounds. I've seen where the brùnaidh is mistakenly lumped together with the ùruisg and the gruagach but each is a separate species of otherworldly creature, the brùnaidh being of the household, whereas the others are creatures of nature.

My first exposure to brownies was as a young Girl Scout. Scouting Brownies take their name from the folklore brownies, as the wee men are a model for the young girls due to the brownie's penchant to assist in household chores, asking for only a bowl of cream or a honey cake for payment.

I became reacquainted with the brùnaidh while doing research for my first romance novel. Thus was born my Highland Gardens series, which revolves around the MacLachlan clan, who resided at Old Castle Lachlan on the . The clan has several legends regarding their clan brownie. The History and Legends of Clan MacLachlan, written and edited by James A. Finegan, states, "The MacLachlan's brounie, known as both Harry and Munn, has been associated with the clan for so many generations that no one really knows when the brounie first appeared." The legends are from 1746 and before.

In the classic work, Faeries, from Brian Froud and Alan Lee—I have the twenty-fifth anniversary edition—brownies are introduced as a species of faerie. The brownie is described as a shaggy male of short stature, no more than twenty-five inches tall, wearing either tattered garments or nothing at all. It is also suggested that brownies living in the have no fingers or toes, whereas those living in the have no noses.

Other references tell a different tale. "In appearance, they (brownies) have been variously described, from squat, shaggy, naked creatures to tall, handsome and well proportioned. They usually kept to themselves, being mostly solitaries, unlike the fairies who were notably gregarious." –Scottish Fairy Belief by Lizanne Henderson and Edward J. Cowan

Although few brownie names are known, there are some who've achieved notoriety: Billie Blin, Aiken Drum, Wag-at-the-wa', and Puddlefoot. With Meg Mullach, also known as Hairy Meg, being one of the few females.

Superstitions of the Highlands and Islands of Scotland, by John Gregorson Campbell is available on the internet for download and provides additional references to the wee men.

As historical figures might be included in a story, why not take the folklore and, using creative license, tweak the nature of these otherworldly beings to include them in romance novels? In my Highland Gardens series, I borrowed the incredibly mischievous brùnaidh of MacLachlan legend. Since brownies are known to have a keen sense of responsibility, Munn is duty bound to the Chiefs of Clan MacLachlan. Part of the twist since many accounts state brownies in general prefer mistresses to masters. In the series, Munn creates all kinds of havoc for my heroes and heroines. 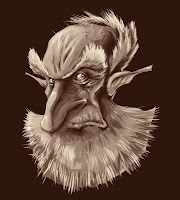 Some say brownies evolved from the lore of the elf, and in my mind, they have similar physical characteristics. The included drawing is of an ancient elf, but his image is similar to the one I imagine for a brownie.

The Brunaidh, whose duty it was to watch over Clan MacLachlan, sat on a stool near the fire, reciting rhymes for Elspeth. He waved his arms as he spoke. Dressed for foolery, the brownie wore baggy brown leather trews and a knee length leine of fine woolen cloth secured at the waist by a thick leather belt adorned with bronze. Around his shoulders, he wore a green brat held in place by a bronze brooch with a large clear crystal in the center. He tapped his feet in rhythm to the cadence of his voice. On those wee feet, he wore green boots with toes that pointed upward.

The little man twisted around, his whisker-covered face scrunched up more than usual. Panic flashed in blue-green eyes, and he jumped to his full three-foot height. His bent nose twitched and he grabbed hold of the funny-looking pointed green cap he always wore.


Just Beyond the Garden Gate by Dawn Marie Hamilton


Have you read a story including such creatures? What do you think of fae creatures in romance novels?

~Dawn Marie
Posted by Dawn Marie Hamilron at 8:56 AM