In 2015, the Winter Solstice takes place on December 21st at 11:48 P.M. EST—the shortest day of the year and the longest night of the year.


To many, the Twelve Days of Christmas fall between Christmas and the Epiphany. To others the festival of Yule begins on the eve of the Winter Solstice and continues for twelve nights ending on Twelfth Night—New Year’s Eve.


“During this time of Yule, we honor the beginning of the sun’s return and the breaking of winter. Let the evening’s feasting begin.”

Twlevetide: Twelve Nights of Highland Magic, one of three holiday novellas in the Enchanted Highlands collection, begins on the eve of the Winter Solstice with the dark moment climaxing just prior to Twelfth Night. Twlevetide—the twelve nights of Yule.


A variety of celebratory diversions were enjoyed by the well-to-do during Yule and, perhaps, shared with their people or clan: feasting, storytelling, masking, music, and dance, along with other revelry,


‘Twas also considered a time when supernatural forces roamed freely—when the spirits of the dead returned to earth.


“Every year on the winter solstice the veil between realms thins and then tears and as Twelvetide progresses the breach between the earth and the otherworld allows all manner of supernatural creatures, including the spirits of the dead, like me, to travel through and roam the earth.”


“Aye. During the twelve days, the fiercest of spirits—men, horses, hellhounds—follow their leader on wild hunts, riding the stormy night skies, causing havoc and mayhem.” 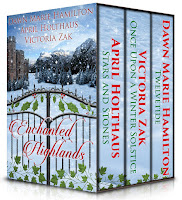 Enchanted Highlands is available at Amazon for 99 cents or free with Kindle Unlimited.